Have loads of bad ideas 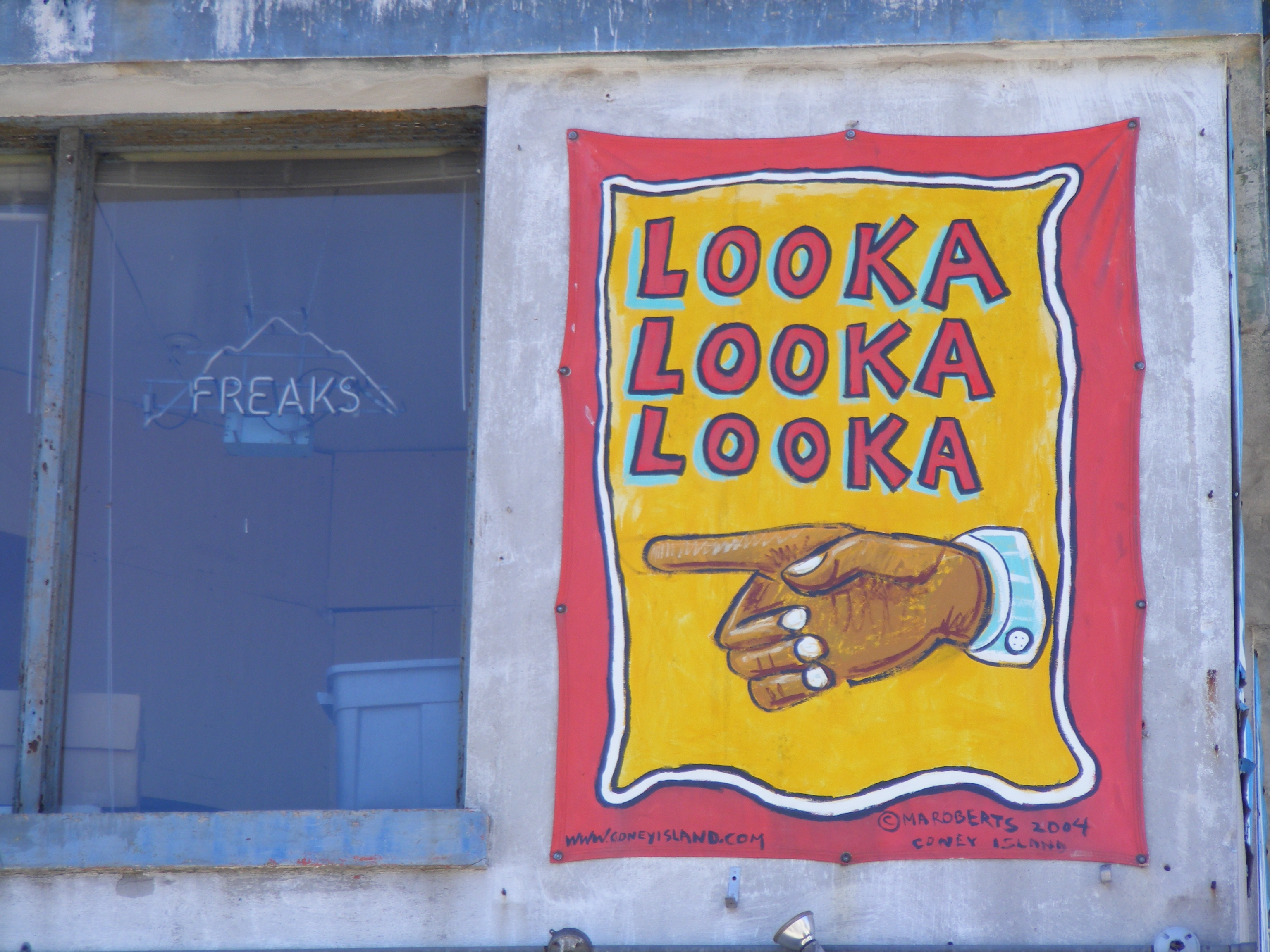 Have you ever been given the advice to have loads of bad ideas before? It might sound ludicrous but it stands to reason that working through any idea that comes to mind, even something that seems crazy, and getting it down on paper, could lead to something that actually makes sense.

This week I gave a presentation introducing GIS to a non GIS audience. I have given this type of presentation several times and quiet often I use (without much thinking) Dr Jon Snow’s map of a Cholera outbreak in Soho.

I normally use three images.

Firstly, the location of all the instances of Cholera being recorded. 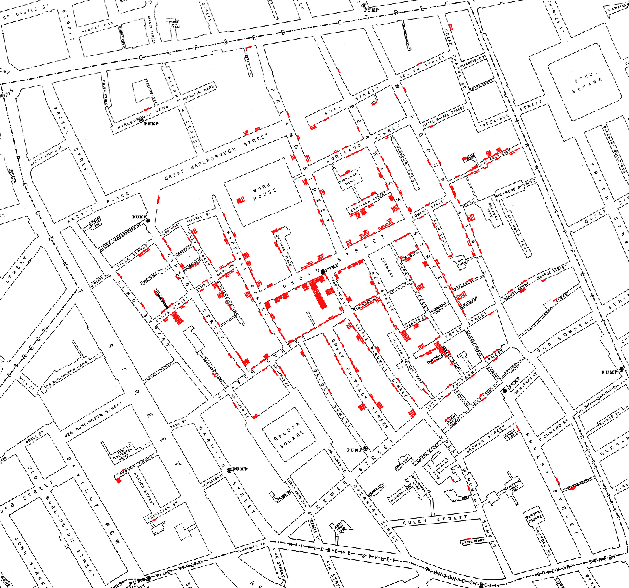 Secondly, plotting these points as proportional symbols related to number of instances at that location. 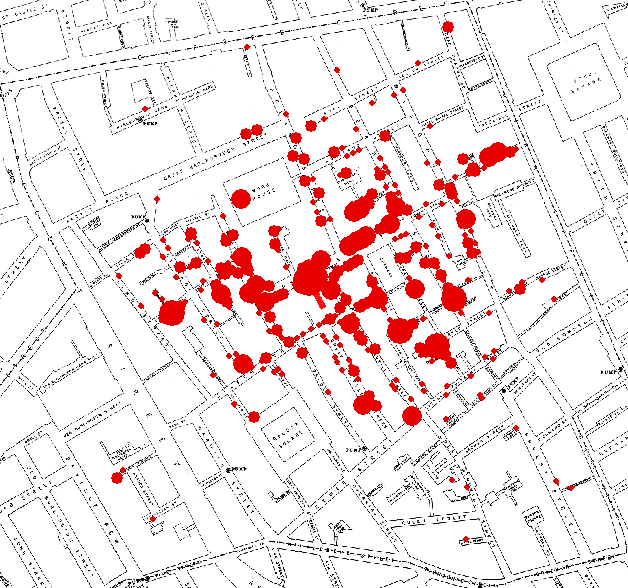 And then thirdly, I plot the locations of the water wells; in this case they appear blue. 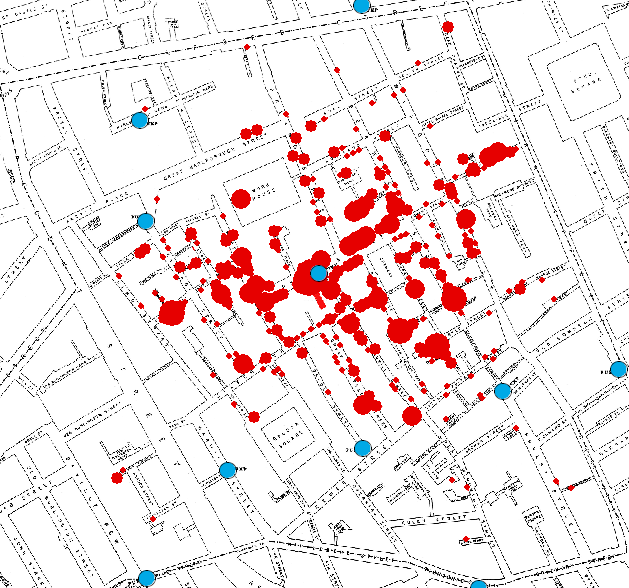 Often at this point the audience has got the point I am trying to make (at least I hope they have) which is essentially Tobler’s first law of geography, namely “Everything is related to everything else, but near things are more related than distant things”. It is a relatively simple example, but it nicely shows the idea of layers of information and spatial relationships. Plus, this map dates to 1854 so it adds the possibility of the twist that this is not a new idea.

All is not as it seems though

By chance I am reading “At Home” by Bill Bryson at the moment and in the Chapter devoted to the Bathroom (stick with me), Bryson devotes some time to Dr Jon Snow. There is a whole paragraph devoted to his skills as an anaesthetist; he ‘helped’ Queen Victoria in labour by administering chloroform and in 1857 he killed a patient by wrongly guessing the amount of amylene that could be tolerated. Interesting stuff.

Snow was living in a time when Cholera was thought to be an airbourne disease, spread perhaps by smell. Snow could not find any evidence for this; what he did find though was in his mapping of cases and the patterns they created. In his paper entitled “On the Mode of Communication of Cholera” he wrote extensively about a clear link between instances of Cholera and water that has been contaminated by human faeces. Guess what?

Great ideas can be perceived to be bad ideas by others

Even after the maps, that are shown above, were created and he had managed to convince the local authority to turn off the pump in the centre of all these cases, still no one could see the link. Snow died in 1858. Cholera still, at that time, was believed to be transmitted by air. I have summarised above from Bill Bryson’s book; if you want to know more please seek out a copy.

We are indebted to Dr Snow’s work, Wikipedia has him as “one of the fathers of modern epidemiology”. Search for GIS on Wikipedia and, guess what, his map of the Cholera outbreak features in the first section. If only he knew.

Even though I gave the introduction to GIS I didn’t realise until I happened upon a chapter in a book, the challenges of acceptance Dr Snow faced with his maps that I showed. In 2004 Larry Page and Sergey Brin as part of the IPO for Google said “We encourage our employees, in addition to their regular projects, to spend 20% of their time working on what they think will most benefit Google. This empowers them to be more creative and innovative.” If this is true (and some question it) then they understood that if people are free to have ideas, some of them will be good, some will be brilliant and some might change the world. But you cannot have great ideas if you don’t have any bad ideas first.

What happened this week? Elon Musk spoke at length about his vision to put people on Mars. Is this a good idea, or a bad idea? Or an inspirational, bonkers or pointless idea? This depends on your own outlook.